This is a story about trusting a stranger, being a little brave, and being honest. It is also a story about how I rediscovered cheese. The main story takes place in a medieval town in south/central France. It was the summer of 1992, and I was there with my Mom on a mother-daughter adventure. 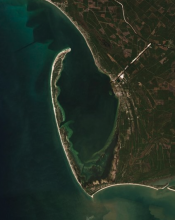 I recently completed a papercut design featuring the area around Cape San Blas, on the southern coast of the Florida Panhandle. I hadn’t heard of this area before, and after finding it on the map, I could see its geographic significance as well as its tourist appeal. Cape San Blas is the “elbow” portion of the St. Joseph Peninsula, which juts into the Gulf of Mexico, looking something like its in a bicep curl contest with New Orleans. 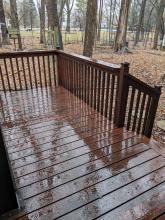 We Minnesotans, as well as those in neighboring midwest states on the “North Coast” endure some pretty long and brutal winters. Some years, winter seems to sink its teeth into us in mid October, and won’t release its grip until late April -- that’s about half of an entire year. Half a year of bitter cold and debilitating snow and ice, during the time of year when we receive the least amount of daylight. Because of this hardship, when winter finally begins to ebb, Minnesotans across the state rejoice when the thermometer fills to above-freezing temps. 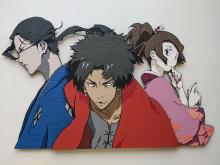 Finally! My trio from Samurai Champloo is complete! 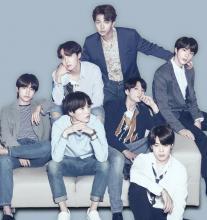 Even though I had planned to finish listening to the excellent audiobook recording of Michelle Zauner’s memoir, Crying in H Mart (read BY the author herself!), I’ve instead been watching and listening to the “Advise and Consent” Hearings in the process to confirm Judge Ketanji Brown Jackson to the US Supreme Court. While I admire Judge Jackson’s monk-like poise and restraint, I find the hearing generally to be a farcical waste of time at best, and a platform for lob-and-retreat disinformation at worst. 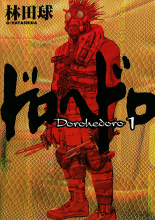 Full disclosure: I'm a weeb. Well, enough of a weeb to know that I'm not Otaku. My youngest kid pulled me into the world of Japanese anime in 2019 when they asked (and begged and pleaded and bargained with) me to watch Attack on Titan with them. At the time, I was looking for some way to connect and spend time with this awkward pre-teen, so, while I didn't think I would enjoy it, I said yes. 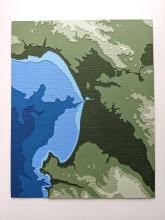 One my tasks this week was to fill a custom request for the beautiful Monterey Bay, California area. I created this 8-layer piece, comprised of four layers of tentacular ocean depths done in the Royal blue set, with 4 layers of land elevation in the full Grass green set.

Over the weekend, I completed two custom pieces for two different people. Both were 12 x 12", both featured both water and topography, and both were fun and challenging to design and assemble, but that's about where the similarities end.