Quick change of topic from my recent artful additions, to bring you a story about our recent canine additions.

If you follow me on Twitter or Instagram, you know that the only thing I share more about than my artwork is my dogs. However, the last time I blogged here about my dog, was three years ago, in a post about Jack. Our dear Jackie-Boy, our first retired-racing greyhound, our black and white cow-dog, our heart dog, passed away in November of 2012 at the ripe age of 14. 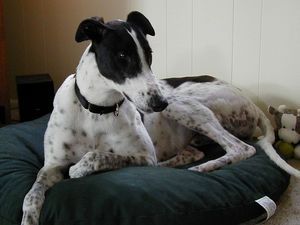 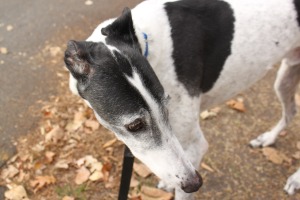 It took use nearly a year before we were ready to adopt again. When we were ready, we fell in love with this “black stallion” named Nova, and adopted him through Minnesota Greyhound Rescue. It took him a few months to fully come out of his shell in his new home with us, but he did and has become the gallant goofball we know and love today. 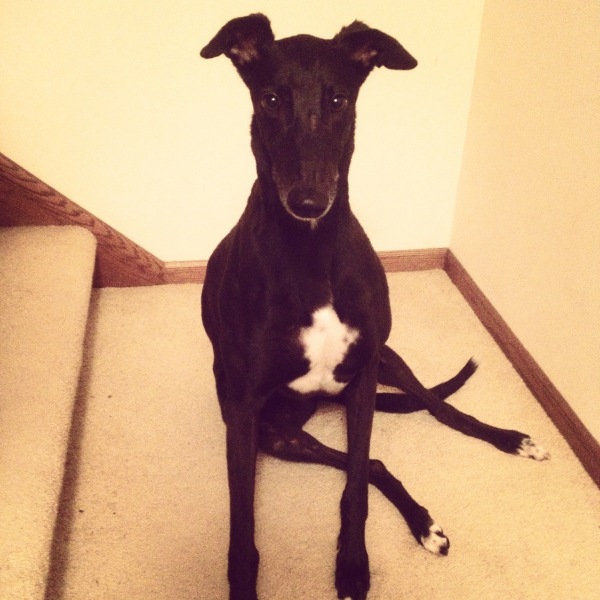 Nova sitting patiently for a treat.

One of the silly phrases used throughout the retired racing greyhound community (and throughout other adoption groups), is something known as “Chipping” or the act of adopting another dog. Like the old potato chip commercials, with dogs, like chips, you can’t have just one. While Jack always seemed to prefer being an only dog with us, Nova liked having another greyhound in the house. And I pretty much wanted as many dogs as we could possibly handle – maybe even more than that. So we looked into getting another dog, definitely another greyhound, and probably a female. And we totally lucked out!

All registered racing greyhounds lead lives online as well as on the couch. The web site Greyhound-data.com lists the family tree, physical data, and racing statistics for most racing greyhounds in the USA, the UK and Australia. This meant that we could trace Nova’s lineage back to the early nineteenth century – a time when notable greyhounds weren’t photographed; they were painted! It also meant that we could see the names and sometimes photos of his littermates, all 8 of them! They were a “Super litter,” all of them with racing names starting with “Super”. Nova’s racing name was DK’s Super Nova. Of the four of Nova’s sisters, one was still racing in Florida. This little girl’s racing name was DK’s Superior. And there was this picture of her, muzzled and resting in the soft dirt of her turnout kennel, and my heart stopped.  “She looks like Jack,” was my first thought. 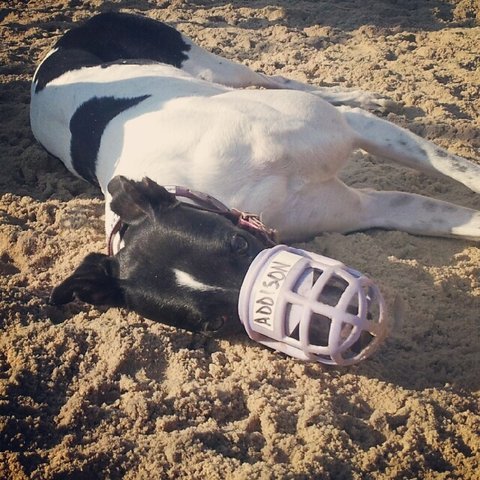 So, I bookmarked her page, and stalked her, waiting for any sort of sign that she was done racing and ready for adoption. The day came in mid-November last year, when DK’s Superior was transferred to and available from a rescue group in New Hampshire. Not that Florida was any closer, but I figured that New Hampshire was too far away to realistically think we could adopt her. I was wonderfully wrong. The amazing people at Fast Friends in Keene, NH (I’m looking at you, Carrie!), were willing to meet us halfway with this little girl. Since the timing of this was right in the middle of my absolutely nuttiest part of the year, my sweetheart Matthew drove out to Ohio to meet Carrie at a designated half-way point and bring home our new pup! 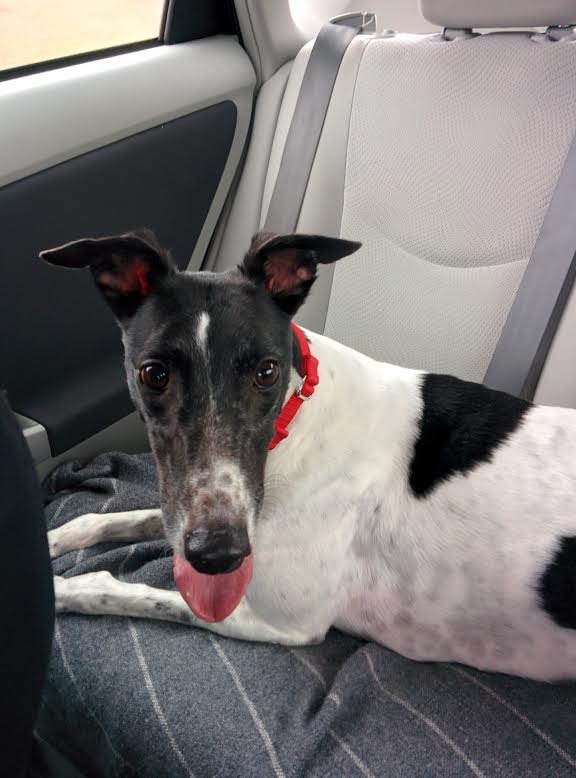 Kylie, on her way home for the first time in her life.

So many things could have gone wrong with this process, from the winter weather not cooperating on the trip to Ohio, to the dogs just plain not getting along. But somehow, everything went just right. Nova eagerly and politely greeted his long-lost sister, and Kylie, this brave, brave girl, settled quickly into her well-earned and pampered retirement. 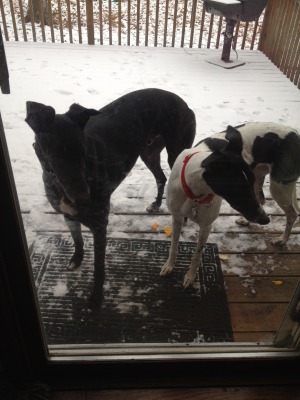 Pups ready to come back inside. 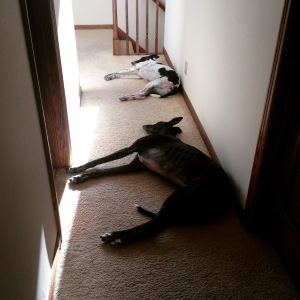 And now, almost two months into sharing our home with two “house ponies,” life is grand. The siblings have similar but not identical personalities, thankfully sharing the easy-going aspects and differing on minor areas that we can work on as we continue to learn about each other. We take both pups to the local dog parks for a romp once or twice a week, but otherwise they hold the floor down around the house. I look forward to walking these beauties down the walking trails and downtown when the weather permits, to taking in their antics, their gentle demeanors, and their sweet faces for many years to come. If I had a tail to wag, I’d do that, too.

In case it isn't yet clear, I'm a little nutty for my dogs, and greyhounds in general, too. If you'd like to ask me any questions about my dogs, or about adopting a greyhound, please do so through the contact page.