Wooo Hooooo! We did it!

It feels incredibly good to have my first craft fair over and done. It was a great experience and, like most newbies, I learned a lot, thankfully with few regrets. The weather ignored all the prognostications for heavy rain, and gave us pocketed sunshine throughout most of the day with only about five minutes of a very light sprinkle mid-day. Every minute that it didn't rain, my smile got bigger and my shoulders relaxed more.

The event was well run and we found our little corner of the market easily. The boundaries of our booth were chalked on the road and we could pull our vehicle right up to it on the other side of the street - how sweet! This made unloading a breeze. We unpacked all the gear and got to work on the tent. I was shaky-nervous and excited. Here's me working on a corner of the tent -- you can see how conveniently close the van was to this. 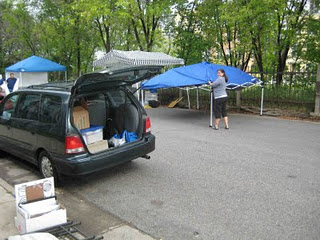 Once the tent was up, we moved on to the tables, the hanging wall doo-dads, and generally getting things up and show-ready. In this pic, you can see some of my essentials: coffee, duct tape, plastic totes, snacks, band-aids, and everything else. 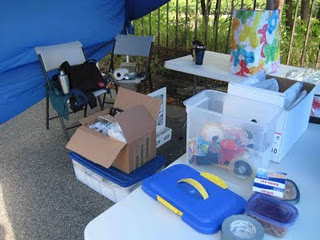 The overall turn-out was fairly slim and not nearly the hordes of people I had seen in flickr pages for other fairs, but it was steady and polite. I gave away quite a few business cards and had many people stop in, ask questions, get closer looks, and offer compliments. 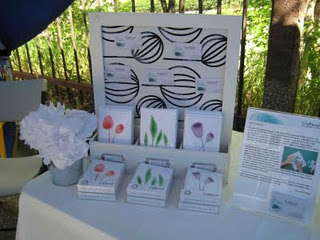 I felt prepared for questions about how I make my things, if I could do custom work, and how long I'd been doing this, but a couple of questions caught me off guard. The very first visitor to my booth asked, "What are these?" Ummm... Isn't it obvious? :) I resisted saying that and realized more throughout the day that it wasn't crystal clear that I was selling art and cards made from layered, colored paper. One person thought the Topo pieces looked like Rorschach ink blots, while another thought on first glance that they were watercolors. Another passerby simply asked, "What's Crafterall?" To which I answered, "That's me! And all the work do here." 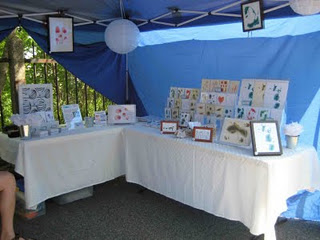 A woman on one side of me sold magnetic jewelry, and the woman on the other side of me sold quilted bags specifically made for four-legged walkers. Other vendors sold fresh, organic produce, screen prints, t-shirts, pottery, fresh-brewed coffee, bath and body products, photo prints, metal ornaments, and some of the tastiest looking pulled meat sandwiches that kept walking by in the hands of happy customers. There were also half a dozen street buskers including a guy on an apartment balcony throwin' out some def turntable spins. Along with a handful of non-profit organizations advertising their causes, the Uptown Market was an eclectic melange of things to see, touch, hear, and eat. Pretty darn cool. 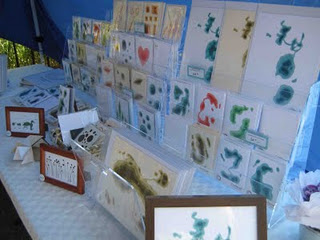 There were so many highlights to my first craft fair. The weather, which became my biggest worry in the last few days before the show, was wonderfully mild. It was a little breezy, but everything in my booth stood its ground. My very first sale of the day could not have been better. The buyer was local, loved the "Chain o' Lakes" pieces I made, snapped one up for herself, and appreciated being able to pay with her credit card. She was enthusiastic and complimentary about everything in my booth -- such a redemptive and encouraging boost for me! I heard lots of other nice compliments throughout the day, and even had a patron say that she had seen my work on Etsy! Awesomeness! She picked up a "Retro Poppies" for herself too. A couple of folks talked with me about potential custom work, and I received confirmation this morning for one such request. 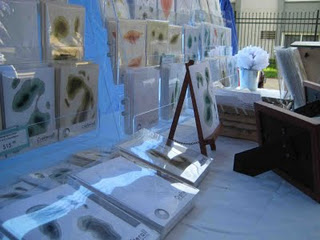 The biggest highlight of the entire process, hands down, was having the tireless and and cheerful assistance of my hubby with me through it all. His MacGyver-like knot-tying and problem-solving/preventing efforts were invaluable and helped to make me a much cooler cookie than I would have been without his help. We were able to chat about what seemed to be working this time, and what we could do differently next time. He also managed the booth while I perused the other booths, and he bought me a yummy lunch from a nearby African restaurant. Thanks, honey! 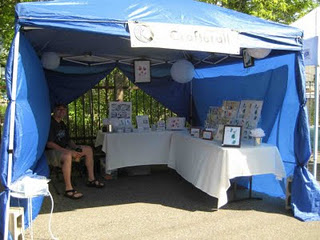 At the end of the day, my earnings were nothing to sing about, but I covered the cost of my booth fee and enough after that to make me eager to do this again in September. Yee-haw!

Congrats on your first show!!

Congrats on your first show! Now that that's over, I'm sure you're ready to sign up for more. Hope to see you around!

Yay, Marnie! I am so proud of you and happy for you! Your husband is the greatest! Your booth looks wonderful and I imagine next time will be even better. Thanks for the post. I appreciate getting to hear and see all the details. Wish I could come and see for myself!People can sometimes be so strange and tactless. "what are these?' I mean, come on~! use your IMAGINATION! Oh well, gotta laugh! Most people get it. I certainly do.Congrats!

This Mama's at the MoMA!
What's New? I'll Show Ya!
A Marvelous Little Mention
A, M, and AZING